Biometric Audiology: Docking with the Brain

By Dennis A. Colucci, AuD, MA

Innovative ideas applying biosensing technology to audiology are offering a glimpse into the future of a new gold standard.

For example, at the 2015 Annual Hearing Conference of the National Hearing Conservation Association in New Orleans, Vishakha W. Rawool, PhD, from the Department of Communication Sciences and Disorders at West Virginia University, proposed combining recent advances in technologies such as the Biostamp and stimulus reconstruction to measure speech recognition skills objectively.

The Biostamp is a flexible sensing sticker with an electrode array. It is coupled to a processor via wireless telemetry and functions without a conventional power supply or battery.

Other investigators have developed techniques to record neural responses from the auditory cortex in response to speech stimuli, Dr. Rawool noted. In one example, electrode arrays were implanted on the superior and middle temporal gyrus, and words and nonwords were presented to the participants to evoke neural responses. The neural data was then reconstructed into spectrograms that could be used for correlation to the incoming signal without input from the patient (PLoS Biol 2012;10[1]:e1001251). 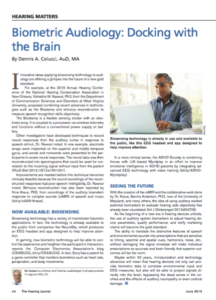