By Dennis A. Colucci, AuD

Labyrinthine concussion is defined as damage to the inner ear due to head trauma with no well-defined injury or skull fracture, resulting in sensorineural hearing loss with or without vestibular symptoms (Korean J Audio. 2013;17[1]:13). Because of the damage tothe inner ear structures, tinnitus is also frequently reported. It has been suggested that designations for cochlear and vestibular concussions should be prescribed to delineate the organs involved in these different conditions. A labyrinthine concussion is typically a unilateral injury to the ipsilateral side, although it can be bilateral, and in rare cases, its symptoms and test result can present as contrecoup. Symptoms of hearing loss, dizziness, and tinnitus are usually reported to occur immediately, within hours after the injury, or a couple of days later. 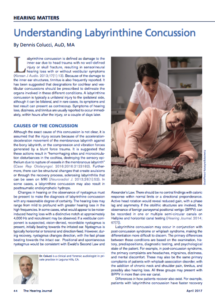