Insomnia and Tinnitus: A Worrisome Cycle

By Dennis A. Colucci, AuD

According to the U.S. Centers for Disease Control and Prevention, 50 million patients report having tinnitus. Within this group, 20 million have burdensome chronic tinnitus and another two million have extreme or debilitating tinnitus. Although the number one cause of tinnitus is aging, other causes include acoustic shock, noise-induced hearing loss, head or neck trauma, ototoxicity, viral and vascular diseases, and a host of other medical and psychiatric conditions. These possible causes indicate that tinnitus cannot be thought of as a single disease specific to the auditory system, but a complex problem that may involve both psychological and neurophysiological mechanisms. The impact of tinnitus on affected individuals seems to be very similar to the impact of insomnia on patients without tinnitus. When experienced together, tinnitus and insomnia share common psychological patterns, with worries about sleep or tinnitus as the universal theme. 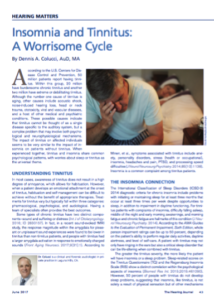