In the Oldest Old Audiological Research is New

By Dennis A. Colucci, AuD, MA

For the oldest old, often defined as people age 85 and over, life has changed to such a degree that they have seen the departure of the Ford Model T and the switchboard operator, the arrival of the electric car and a Dick Tracy-style smartwatch, and the promise of tourist trips to outer space.

As the future continues to unfold, advanced age will be experienced by many more of our seniors, with hearing loss and central presbycusis hampering their health and quality of life.

In the United States, the 65-and-older population will double by 2030 to reach 72 million, according to the National Institute on Aging. Within this population, there are currently 53,000 people age 100 or older (2010 Census), but it is estimated that this number of centenarians will quadruple to 212,000 by 2030.  The projected increases in the oldest-old population are the result of a variety of forces affecting longevity, not just the aging population. 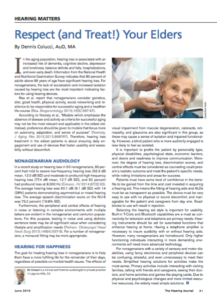